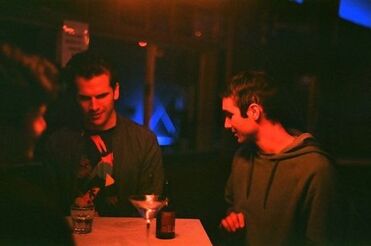 Clay recently wrapped work on the streaming series HERE COMES YOUR MAN. Shot on location in Los Angeles, the show, written and directed by Omar Salas Zamora, centers on the exploits of a young guy in his 20s who realizes he's gay. Von Carlowitz plays the guy's straight best friend, Malcolm, who finds himself having to learn how to be there for his buddy while coming to terms with what might be a different dynamic to their friendship. The 5-episode Season 1 is set to premiere this summer on Dekkoo, a queer-themed channel, as well as Amazon Prime. 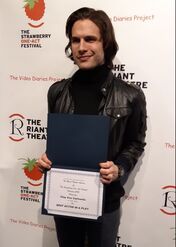 On the strength of his well-received performance in ENTR'ACTE, von Carlowitz was nominated for Best Actor for his portrayal of Richard, an emotionally unhinged young performer whose feelings for his acting mentor get complicated when he learns of the man's abusive past. Clay was thrilled for the opportunity to jump onstage again, and hopes any awards recognition leads to more exciting challenges down the line. 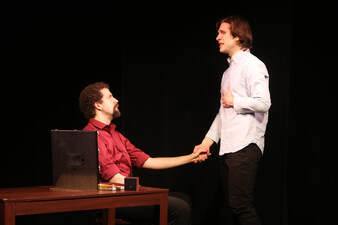 Clay recently finished a weeklong run of the short drama ENTR'ACTE at the Strawberry One Act Festival in NYC. Written by Anthony Fusco and directed by Katherine Yacko, the play centers on a young actor (von Carlowitz) who decides to call out his coach, mentor and sometime lover (Peter Tarantino) for a history of predatory behavior. The festival brought together many of New York's best and brightest, and Clay was fortunate enough to get to advance to the final rounds of competition. There are tentative plans to revive the piece for sometime this summer, so stay tuned...